Van Andel Institute’s Biorepository is the recipient of a five-year, $7.9 million contract from the National Cancer Institute (NCI), part of the National Institutes of Health, to continue serving as the biorepository for the Cancer Moonshot Biobank study. 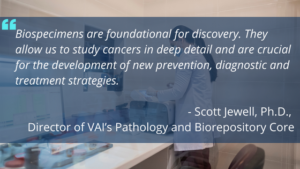 This announcement coincides with a Sept. 12 speech made by President Joe Biden on Cancer Moonshot, the 60-year anniversary of President John F. Kennedy’s iconic moonshot speech, announcing his goal of sending a man to the moon. Last week, Biden’s speech reminded Americans of his own moonshot goal of ending cancer and the important work of the current phase of Cancer Moonshot, announced by Biden in February.