Victorian Cancer Biobank (VCB) is a not-for-profit biobank funded by the Victorian Government’s Department of Health and Human Services with the Cancer Council Victoria as lead agency.  The funding goals are to provide high quality, ethically obtained biospecimens to support research that will eventually lead to improvements in cancer diagnosis and treatment. The VCB is a consortia of hospital sites across the Melbourne metropolitan region including; Austin Health, Eastern Health, Melbourne Health, Monash Health and Peter MacCallum Cancer Centre. The VCB network consists of five tissue bank sites and four repositories across a network of twenty seven hospitals within Victoria. 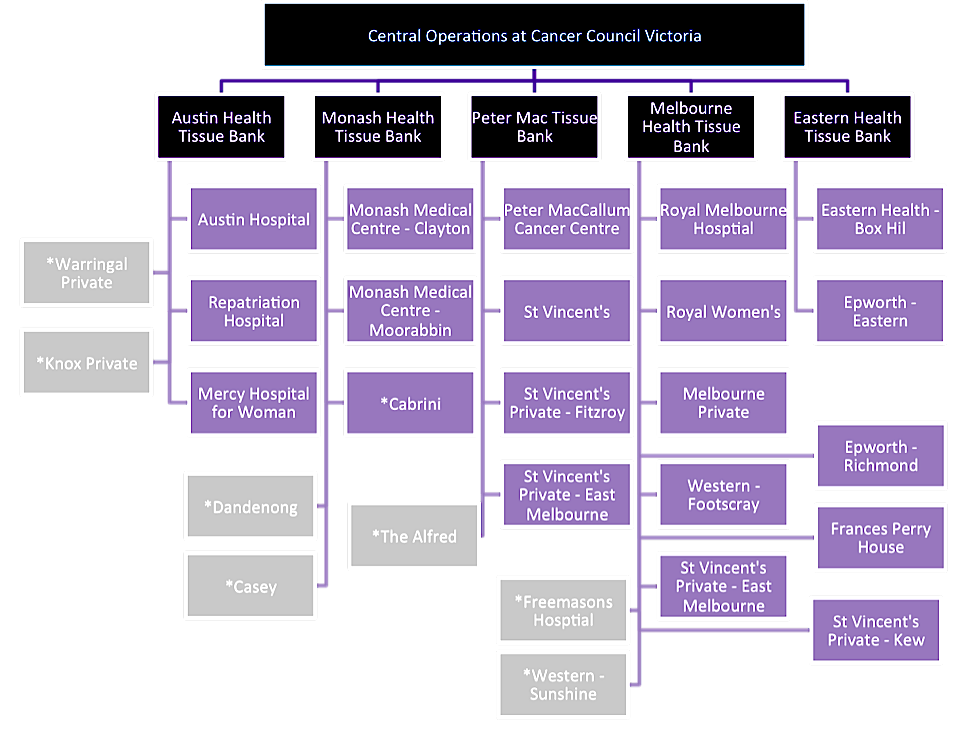 VCB provides a diverse range of tissue and blood products to support local, national and international research communities. Since 2007, 165 research projects have been successfully serviced. Currently the company is engaged in supporting 47 research projects which require quality controlled and highly annotated biospecimens. 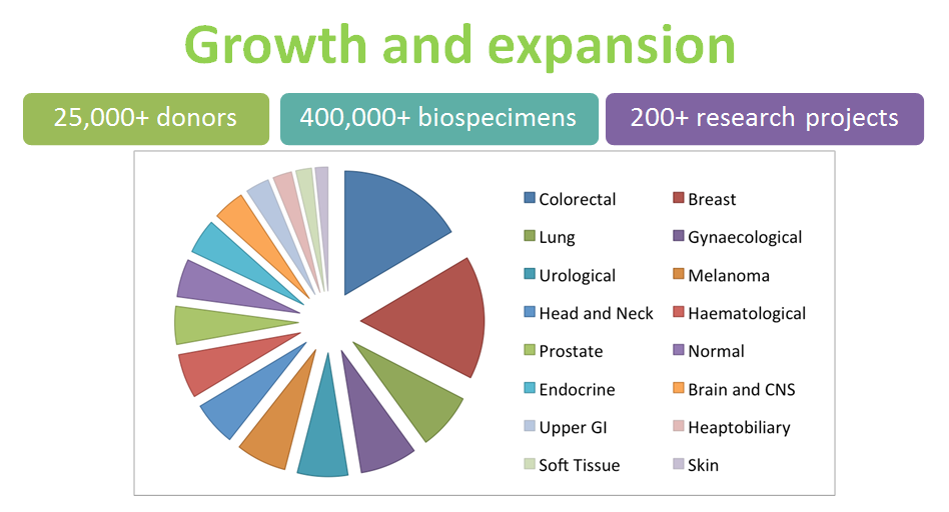 The VCB’s search for a new database

VCB’s first attempt to implement a biospecimen database was to purchase a local ‘home-grown’ system that proved adequate for simple annotation, but became prohibitively expensive when modifications were required to add more complex data.

The second attempt was to purchase a  commercial product that promised comprehensive data fields, inventory tracking and ease of use. However with its inability to scale, lack of proper support and poor customer service, the VCB had to fall-back to other electronic filing systems just to keep on top of its data management needs. Coupled with the multiple concerns and lack of customer support that ensued, there was dissatisfaction amongst all the Tissue Bank Sites and staff. Long delays in uploading the data had a negative impact on productivity and efficiency.

It was obvious that for business growth and an ever widening customer base, VCB needed a reliable and scaleable biospecimen software allowing for tissue tracking.

VCB evaluated databases purporting to be designed specifically to address biobanking requirements. Without question, OpenSpecimen delivered on its promise of a ‘gold-standard’  Biospecimen Management System (BMS). i.e. a biobank software was required which could adapt to and change as uniquely as trends in science.

“We have been very impressed with the level of professionalism and expertise  given to us by the OS team in understanding the complex requirements of biobanking. What most impressed us during the period we had to ‘play-with’ the system, was that the OS team was genuinely interested in listening to our needs and finding the  solutions that met our expectations, rather than trying to make us conform to a pre-set platform.” said Audrey Partanen, Executive Officer at VCB.

“From the moment the VCB engaged with Srikanth Adiga and Poornima Govindrao, there has been a continuous momentum that has facilitated the development and successful production of the new database” said Brooke Backman, Project Manager at VCB.

The VCB found that for the key identified needs of a database, OpenSpecimen provided the following: 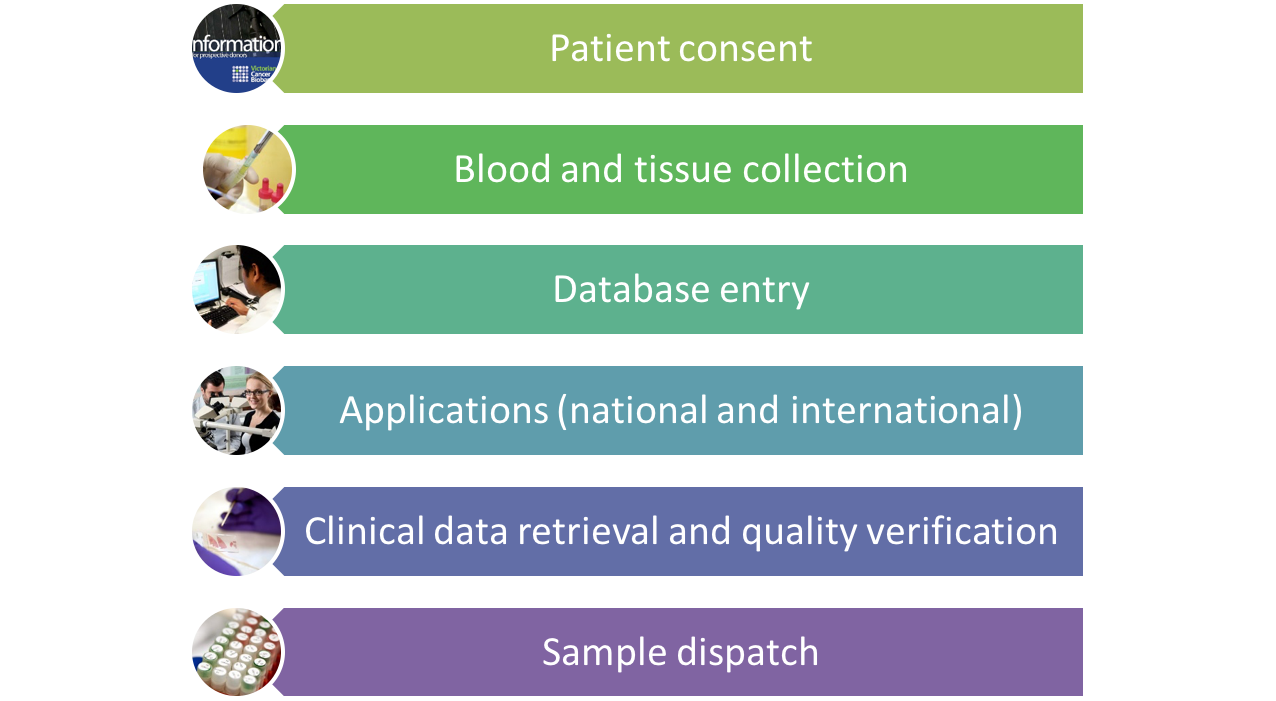 The adaption to OpenSpecimen has been seamless and the future outlook for data entry and providing high quality clinical annotation to researchers has greatly improved.

VCB now has fully adapted OpenSpecimen to reflect specific practices including collection protocols, storage facilities and specific research studies across all of their sites.

“VCB operates as a ‘hub and spoke model’ with standardised practices and protocols that support our mission and strategic goals. To ensure an effective rollout of OpenSpecimen, our partner biobanks were intimately involved in its customisation to ensure that the end-product was intuitive and assisted with workflow efficiencies and productivity.” said VCB Database Manager, Caroline Drinkwater.

Caroline further said “Krishagni developed a plugin for us based on the specific data collection needs and workflows. By having a centralised biospecimen management system for data entry of patients and specimens, VCB Central Operations will now have confidence that they are accessing an accurate inventory of specimens along with high quality annotated clinical data, which will assist central operations with responding to and servicing researcher requests.”

The greatest challenge faced was importing legacy data into OpenSpecimen. Due to the large quantity of data and the deficiencies from the previous database (which is in a French schema), it has been a huge task to clean and map in preparation for migration. This process is still on-going and is scheduled to be completed during November 2016.

Moving forward, VCB plans to utilise the specimen catalog plugin to allow prospective research clients to investigate availability of samples from all VCB repositories in a de-identified format.

“We are particularly interested in updating to v3.2 in the future to utilise the Simple Data Entry (SDE) plugin, which will improve data entry workflow efficiency at our busy biobank sites. We will also look into linking to other information platforms such as Aperio and potential future tablet/iPad capabilities. VCB looks forward to enjoying the flexibility and on-going improvements to OpenSpecimen and a continued relationship with Krishagni Solutions” said Caroline.

This site uses Akismet to reduce spam. Learn how your comment data is processed.