Biorepositories and biodiversity information systems in Bhutan were instituted since 1990s, and have contributed towards biodiversity conservation and sustainable utilization efforts in the country, including the recent citizen-science initiatives. 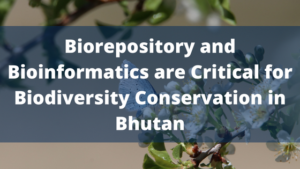 The biorepository and bioinformatics were initiated along with other biodiversity conservation programs aligned with the Aichi Targets and the National Biodiversity Action Plan targets. Bioinformatics in Bhutan is still in its initial stage, however some biorepositories have already incorporated information systems for their collections for effective planning, curation, and management.

Bhutan has established biorepositories such as the National Herbarium for wild plants, National Plant Gene Bank for crops and seeds, National Animal Gene Bank for livestock, Taxidermy for wild animals, National Invertebrates Repository for invertebrates including insects, and other repositories distributed at various institutions covers the taxonomic groups such as fishes, amphibian and reptiles, butterflies and moths, mushrooms, bryophytes, agricultural pests, among others.