Although the word “biobanking” emerged in the 1990s, it has yet to acquire a set meaning. For some, the word encompasses the long-term storage functions fulfilled by biorepositories; for others, it refers to the administrative work and scientific projects that biorepositories support. Perhaps the word is in flux because biobanking itself is in flux. 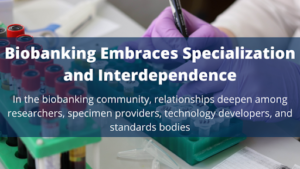 Initially, biobanking was a DIY pursuit. It was something that small, individual laboratories would do using ordinary freezers and handwritten notes. More recently, biobanking began projecting a “big science” manner. For example, ambitious biobank projects such as the UK Biobank and the All of Us Research Program were launched with the assistance of government agencies.

Although biobanking is most readily imagined as a cottage industry or as a massive governmental initiative, it is, for the most part, something in between. It is a maturing industry. And like any such industry, it has a division of labor. As this article illustrates, biobanking’s division of labor encompasses the curation of data registries to support precision medicine; the development of biomarkers to simplify assessments of biospecimen quality; the building of online communities to help researchers connect with biospecimen providers; the development of technology to further automation; and the promulgation of standards for validation and accreditation.